Ohio man is first to be charged for sending threatening tweet about Donald Trump on election night.

A federal court has charged a 24-year-old man from Ohio after tweeting a threat to assassinate President-elect Donald Trump on election night. 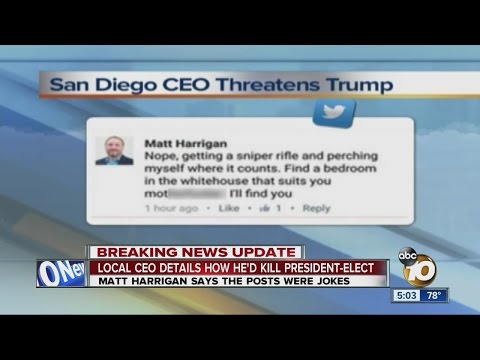 Zachary Benson, from Fairview Park in Cleveland, posted the remark on Twitter a few minutes before the Republican nominee was declared the winner of last week’s election.

Benson tweeted: ‘My life goal is to assassinate Trump. Don’t care if I serve infinite sentences. That man deserves to decease (sic) existing.’

Seconds earlier he tweeted: ‘Diplomacy. F***ing fools. I hate you all. I want to bomb every one of your voting booths and your general areas.’

Benson was arrested a few hours later and interviewed by the Secret Service.

After the results were announced, many of those who opposed Trump rushed to Twitter to call for his assassination. But Benson is believed to be the first person to be charged in connection with one of those tweets.

The Cleveland Plain Dealer reported that Benson told the Secret Service agent he spent election night drinking and eating at a restaurant with his father and a friend.

While Matt Harrigan says his tweet about killing the president elect was a joke, he faces a federal investigation also. He has resigned after making the threats on Facebook.