Drinking Too Much Water Intoxication Can Be Deadly, Doctors Warn!

Water is the liquid which descends from the clouds as rain and it is colourless, odourless, transparent, liquid which forms the seas, rivers, lakes and is the basis of the fluids of living organisms.

We have numerous benefits of drinking, but water intoxication is bad as it can cause death! Drinking too much water can increase pressure inside your skull which can cause several symptoms and even fatal in severe cases such as hyponatremia. Doctors at King’s College hospital in south London are against the recommendation of drinking excessive water, when they treated a 59-year-old woman that drank too much water which make her to became gravely il .

This nameless woman, overdosed on water when she develop symptoms of a urinary tract infection.

The woman was told by another doctor to drink excess water – half a pint every 30 minutes – with the intention to ‘flush out her system’.

OVERHYDRATION DANGER, HOW MUCH IS TOO MUCH? 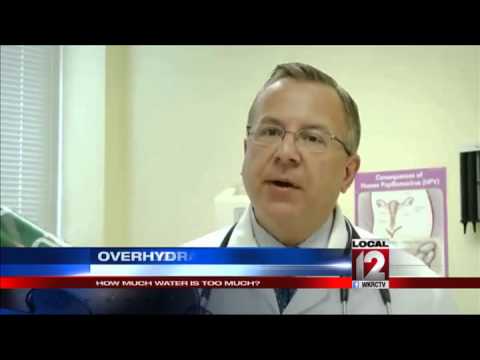 She was admitted to King’s College hospital, and doctors discovered that she was suffering from terribly low levels of salt in her blood.

Low levels of salts in the body can occur if too much water is drunk over some time, which can cause hyponatremia

This symptoms include vomiting, nausea and headaches. In most cases, it can affect brain and can cause it to swell, and can lead to confusion,coma, seizures and in worst cases death.

About 30 percent death rate has been reported for patients who has abnormally low levels of salt.

Recent  journal of BMJ Case Reports, shows that doctors are however yet to discover much evidence as to the quantity of water that is too much.

THE DANGERS OF TOO MUCH WATER 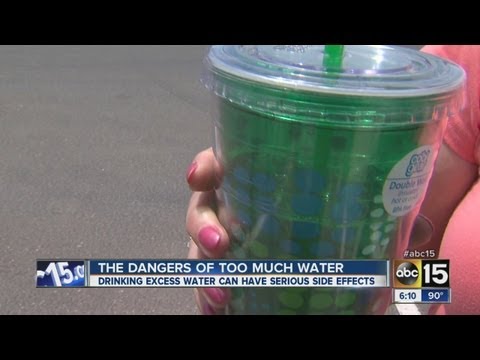 The doctors described the woman’s state when she was brought to the hospital: “During her visit to the emergency department, she became progressively shaky and muddled. She vomited several times, was tremulous and exhibited significant speech difficulties.”

They  were however able to save the life  of the woman with treatment which includes restricting her water intake to a litre over the next 24 hours The doctors treated another case in which a young woman who was suffering from gastroenteritis died after she consumed too much water.

A patient, wrote about her own experience in the BMJ journal and said: “I lost 24 hours of my life when a simple UTI, or rather my actions in response to it, took over my life”.

“I remember seeing my hand in front of me shaking rather violently and I wondered why I could not stop it, then realised that my whole body was shaking.”

The woman spent 24 hours in the hospital – long stretches of which she couldn’t recollect before she was discharged from the hospital.

she wrote that “It took about a week to feel ‘normal’ again and if I am honest I think I was tired for at least another week,”.

People who taking part in endurance sports and those who take MDMA drug are also at risk of very low salt levels.

The British Medical Journal case report, Dr Maryann Noronha and Dr Laura Christine Lee  – wrote: “We frequently advise our patients to ‘drink plenty of fluids’ and ‘keep well-hydrated’ when they are unwell.”

“But, what do we mean by that? Are there potential risks of this apparently harmless advice?”

“As demonstrated here, the harmful effects of increased fluid intake include confusion, vomiting and speech disturbance, and potential for catastrophic outcomes due to low blood sodium concentrations.”

In their conclusion, they said that: “There is a paucity of evidence behind the advice to “drink plenty of fluids” in the management of mild infective illness.”

However, Dr Imran Rafi, who is the chairman of clinical innovation and research at the Royal College of GPs, said: ‘Drinking enough water is important in keeping healthy, both physically and mentally, and patients should keep their fluids up when unwell, particularly in conditions that can cause dehydration”.

‘We would encourage patients to drink more if they have symptoms of dehydration, such as feeling thirsty – including in hot weather or when exercising – or passing dark-coloured urine. There is no steadfast recommendation as to how much water people should drink in order to stay healthy, but the key thing is to keep hydrated – and passing clear urine is a good indication of this.

‘This case report highlights that excessive water intake can have important consequences for patients, and this is something that healthcare professionals, and patients, should be mindful of.’

The Public Health England  strongly recommend people to be drinking between six and eight glasses of fluid per day, but current NHS England guidelines suggests drinking “plenty of water”.

Here Is The Real Deal

Here is the real deal! in all, moderation should be the key thing.

You have to keep things very simple and follow these guidelines, which should apply to at least 90% of people for healthy living:

Your kidneys are only capable of excreting up to 7 gallons that is about 28 liters of water per day. But, the kidney cannot excrete anything in excess of 1 liter per hour. In conclusion, if you are drinking too much of water, is not a good idea. For benefits of water in take click here